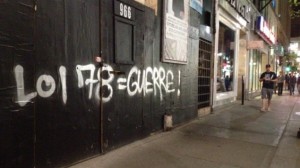 Posted in General | Comments Off on La loi spéciale on s’en calisse!

Montreal: While the State sharpens its knives: confrontation with the cops and attacks on banks

Wednesday, May 16, while the state sharpens its knives, demos are taking place in several cities against the extension of the Police State by announcing the preparation of a special law and new municipal regulations* in a desperate attempt to regain control.

After just over 45 minutes in a dumbass in a tie began insulting and provoking the crowd and found himself surrounded, the cops began to pepper spray and the crowd responded with a few stones and garbage cans. The cops started throwing shock grenades and fired plastic bullets. Minutes later the windows of several banks were shattered into pieces. END_OF_DOCUMENT_TOKEN_TO_BE_REPLACED

Posted in General | Comments Off on Montreal: While the State sharpens its knives: confrontation with the cops and attacks on banks

Thursday, April 17, in Gatineau the three campuses of the Cégep de l’Outaouais were evacuated for several hours due to a bomb threat around 8 am, finally being a false alarm.

In Laval, classes were suspended for the day at College Montmorency also because of a bomb threat.

Posted in General | Comments Off on Campuses evacuated by bomb threats

Wednesday May 16th around 9:30 pm. about a hundred people showed up at the Tangay detention center for women on Henri-Bourassa in Montreal. where three young women accused of throwing one of the smoke bombs that paralyzed the Montreal metro last Thursday. The SQ dirt-bags were already on the spot. END_OF_DOCUMENT_TOKEN_TO_BE_REPLACED

Smoke bombs in the metro – who are the terrorists?

On the morning of May 10th, smoke bombs in three subway stations crippled the entire network for over two and a half hours during rush hour.

Posted in General | Comments Off on Smoke bombs in the metro – who are the terrorists?

To write one’s experience is a means of expression. To put it outside of oneself, and be able to understand, to regain power. If I write what I experienced Friday in Victoriaville, it’s to put a distance from what I’ve felt since, to share it for deconstructing the media discourse and misinformation, so that ultimately these events, instead of dividing and defeating us, bring us collective power.

This account is intended as a revisiting of the events surrounding a demonstrator who’s head was severely injured. I was present in the case of Alexander, the moment he found himself on the ground, until he left in an ambulance. END_OF_DOCUMENT_TOKEN_TO_BE_REPLACED

May Day: A Strike Is a Blow

From CrimethInc.; original post includes a photoessay from Seattle May Day set to a song by Underground Reverie.

As the momentum that originated with Occupy Wall Street tapers off, May Day 2012 saw anarchists on the West Coast consolidate their gains in the street with actions from Los Angeles to Vancouver. In a series of first-person vignettes from the Bay Area, we evoke the atmosphere of May Day 2012 and plumb the questions it poses. END_OF_DOCUMENT_TOKEN_TO_BE_REPLACED

Posted in General | Comments Off on May Day: A Strike Is a Blow

Are you ready for summer?

Posted on 2012/05/12 by grevemontreal
Posted in General | Comments Off on Are you ready for summer?

Poster Series: What Does Democracy Mean?

Just in time for May Day, we are excited to debut a new line of posters: “What Does Democracy Mean?” [PDFs 700k] Together, the posters explain how democracy depends upon policing, borders, and other institutions of control. Please print, photocopy, and circulate widely!

We hope that this series will help to clear up lingering confusion about the differences between democracy (a form of government) and anarchy (i.e., freedom). Democracy, even direct democracy, is not the same as self-determination. Democracy is premised on the idea that only one decision-making body should have legitimate authority, while anarchism proposes the decentralization of power: not just horizontality, but also autonomy.

What Does Democracy Mean?

Our forebears overthrew kings and dictators, but they didn’t abolish the institutions by which kings and dictators ruled: they democratized them. Yet whoever operates these institutions—whether it’s a king, a president, or an electorate—the experience on the receiving end is roughly the same. Laws, bureaucracy, and police came before democracy; they function the same way in a democracy as in a dictatorship. The only difference is that, because we can cast ballots about how they should be applied, we’re supposed to regard them as ours even when they’re used against us. END_OF_DOCUMENT_TOKEN_TO_BE_REPLACED

Posted in General | Comments Off on Poster Series: What Does Democracy Mean?

Posted in General | Comments Off on [Affiche] : Avis de tempête

The Battle of Victo – témoignages

– Yesterday CUTV News tried to help get an ambulance for demonstrator shot in the head. SQ refused to get help and told us to call 911. It took around 20 min to get help. CUTV (Concordia University Television) will release video in a few hours. END_OF_DOCUMENT_TOKEN_TO_BE_REPLACED

Posted in General | Comments Off on The Battle of Victo – témoignages

translated from french by sabotagemedia

Charest ran away to Victoriaville with his gang, the big Liberal “Family” as they like to call themselves, but they were quickly caught up with. Thousands of people from all over the province gathered in Victoriaville during the first day of the Quebec Liberal Party’s general council which was going to be held in Montreal, but had been moved at the last minute for fear of the uprising raging there.

After several speeches the march arrived at around 6 pm near the Convention Centre at Le Victorin hotel – where the SQ riot squad was waiting with its whole arsenal. At about 6:30 pm the metal barriers fell and the clashes began. END_OF_DOCUMENT_TOKEN_TO_BE_REPLACED

Signals of Disorder: Sowing Anarchy in the Metropolis 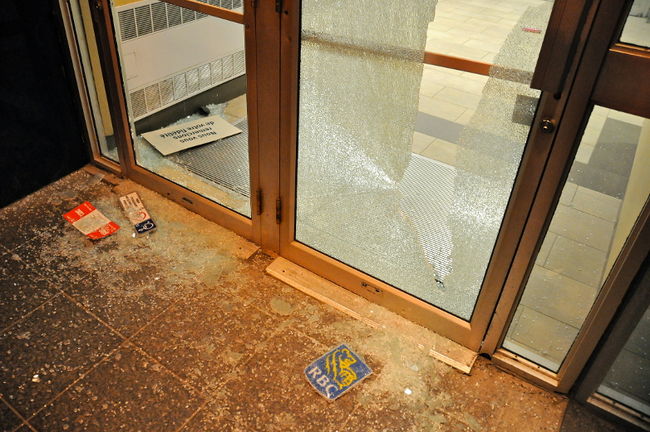 In an article in the recent book, We Are an Image from the Future: the Greek Revolt of December 2008, I briefly made a point that a friend convinced me needs to be elaborated. The idea is that of “signals of disorder,” and their importance in spreading rebellion.

As far as Greece is concerned, the argument is that by carrying out attacks—primarily smashings and molotov attacks against banks and police stations, which constitute the most obvious symbols of capitalist exploitation and State violence for Greek society—insurrectionary anarchists created signals of disorder that acted as subversive seeds. Even though most people did not agree with these attacks at the time, they lodged in their consciousness, and at a moment of social rupture, people adopted these forms as their own tools, to express their rage when all the traditionally valid forms of political activity were inadequate. END_OF_DOCUMENT_TOKEN_TO_BE_REPLACED

Posted in General | Comments Off on Signals of Disorder: Sowing Anarchy in the Metropolis